Didn’t Bruce Brisson work at Monster Cable?
In 1981, Bruce Brisson licensed Interlink Reference to the Monster Cable Company. Interlink Reference was the first purposefully built audio cable. It was built with Brisson’s patented technology that corrected for problems relating to phase shift internal to the conductor. Everyone could hear the difference when hooking up Interlink Reference and the cable industry kicked into ‘high gear’. Additional designs by Brisson for Monster Cable included Powerline 2 and Powerline 3.
Other high-end companies that have used, or are still using Brisson’s designs, include Spectral Audio, Inc., Jeff Rowland Design Group, Wilson Audio Specialties, Martin Logan Loudspeakers, Goldmund Audio and Skywalker Sound.

How do I determine a budget for cables?
The general rule of thumb is about 20% of the value of the component you are connecting or putting into service. This is per connection, so you may have to compromise here and there to get everything optimized for your particular budget. The “Multipole Rating System” describes the exact performance level of each cable so you know you are getting exactly what you are paying for! At any time you can contact customerservice@mitcables.com to get the latest information on what’s new, or suggested connections for optimizing any Audio or Video System.

Is there really a difference in digital cables?
Yes there are. The digital signal from a DVD player, CD Transport, or set top box, can transmit a lot of information. There are four common digital connections for this interface. Most common is 75ohm RCA connection, and a Toslink, or “fiber optic” connection between your player and receiver. Higher end connections will be ASE/EBU 110ohm connection or a BNC connector. Whatever the connector they all transmit information in a square wave digital signal. Cable can play a big part in transmitting this signal with less “jitter”, “jitter” equals noise. This noise can be seen on an oscilloscope at the top and bottom of the wave form. This wave form is rising and falling sometimes thousands of times a second like a switch being turned on and off very quickly. Digital Coax cable is available in varying speeds to which it allows signal to flow. They are measured in a unit of VP, or “velocity of propagation”. Cables that have a “low VP” will not transmit digital signal as well as cables that have a “high VP”. Other materials like silver and Tri-poly-ethylene di-electric material will aid in increasing the VP of the cable. The number associated with a VP rating is the percentage of the speed of light that a signal is traveling over the conductors. MIT Digital Interfaces have one of the highest VP Ratings in the industry. Coupled with our patented parallel digital networks, nothing works better at giving you better bass, clearer mid-range and more articulate high frequencies, with out being harsh or fatiguing.

What is the benefit with Multi-Pole technology?
Multipole technology is like having the performance of many cables rolled into one. Simply put, any cable, network or filter will have measurable components of inductance, resistance, and capacitance. The different combinations, or values of those components create a point of magnitude (Pole), somewhere within the audio range. Every cable will have one measurable, and definable pole that will define the articulation range for transferring the music. When comparing this articulation pole from manufacturer to manufacturer, it will usually be centered at different frequencies. The placement of this articulation pole is the main reason we hear differences in cables. Let’s say you had a cable that sounded great in the bass frequencies, and then a cable that did very well in the mid-range, and yet another that was very good at transporting the higher frequencies, and you bundled them all together to make one cable. In theory, you would have built a “three pole-MultiPole- audio cable.”

MIT Multipole technology is our patented solution for allowing all of the frequencies, and all of the music from your recordings to be heard without either emphasizing or de-emphasizing any of the music. For reference purposes, various MIT Multi-pole technology levels can ascertained on all of our products. This is signified by a number and an X. For example. our AVt Level 1 RCA interconnects have a logo that reads “5X”. This means that this product has five times the performance of just cable, so when you see these numbers on our packaging you will know instantly what level of performance that you are looking at. Multi-pole technology will deliver better bass, clearer mid-range and more articulate high frequencies when used in any audio system.

Should I use the same level interconnects as cables?
MIT was careful to name products so that products with similar names will indicate optimal compatibility. Shotgun interconnects are ideal with Shotgun Speaker cables, Magnum interconnects for Magnum Speaker cables etc. From time to time, there are advantages to interconnect upgrades, but a call to the factory is always advised when considering a departure from normally recommended matches.

Do the length of cables matter when connecting my system?
This is a popular and universally misunderstood question. Long Speaker cables and short interconnects are the best way to place amplifiers and front end equipment where you are going to be best served. As a rule, all interconnects will start to roll off high frequencies when they exceed 3m (10′) in length. Balanced cables are best if long runs are a must. This 3m rule is the reason that we do not offer impedance matching circuits on long lengths because as the amount of copper becomes the controlling factor in the balance of L to C to R, we must take this measurement first. Then the networks are built around these measurements. Input impedance from the destination device is needed for optimal interfacing.

What is “Imaging?”
In High End Audio, we use visual terms to describe things we can’t see, so we sometimes confuse those who are new to this field of interest. ” Imaging” describes the effect you can get when sitting strategically between a stereo signal played back from two speakers, to your two ears. The brain interprets this information so well, that you should “see” all the elements of the band, or instruments exactly where they were placed on stage in front of the microphone(s) with your eyes closed! We call this “2C3D” for two channel, three dimensional imaging between, and around the speakers. A properly set up system will fool the listener into thinking that they are sitting in a full surround sound system, and will insist that there are far more than two speakers in play!

Can an average person “Hear” the difference?
You bet! One of our favorite demonstrations is to use “lamp cord” as speaker cables, and then add the AVt S CI-modules to each channel and play the difference. In four days during the Rocky Mountain Audio Fest, we thrilled audiences more than 30 times a day. There were none present that claimed to “not” hear the dramatic improvement in articulation, detail and a genuine sense of “being there.”

What is the “Efficiency Scale” developed Bruce Brisson?
A key element that was always missing when discussing the performance of audio and video cable was the ability to quantify performance through test results. In 1992, after years of R&D, MIT announced the development of the Efficiency Scale, a test and measurement program that correlates sonic qualities of cable with test-bench performance. Using proprietary software designed by MIT in conjunction with Hewlett-Packard, MIT was now able to measure a network’s complex impedance, including its phase,and calculate its in-phase power and losses. These are the very factors that show how efficiently a given audio network or cable will pass the signal from input to output. MIT was able to combine these results into a single graph to characterize and correlate a network’s sonic performance to what the ear hears, something no other cable company has the ability to do.

I have Oracle series speaker cables with spades and my speakers can only utilize banana’s. Is there a way to covert this over to a banana without altering the cable?
Yes! Please see this photo below: 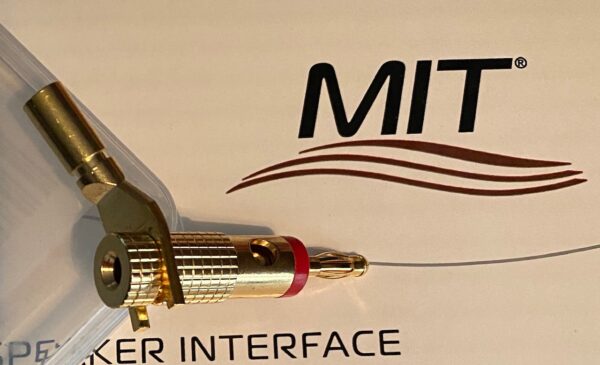